By Youghal Tourism Friday AT 2:14PM

Georg Friederich Händel composed his Messiah in 1741 in just 24 days.   Messiah’s  scriptural text was compiled by Charles Jennens from the King James Bible and the Book of Common Prayer.

Handel was invited to Dublin by William Cavendish,  Duke of Devonshire, then serving as the Lord Lieutenant, to give a series of concerts in winter season of 1741 – 1742.  (We note here that this William Cavendish was a direct descendent of Richard Boyle, 1st Earl of Cork – the Richard Boyle who was responsible for the economic boom in Youghal back in the 1600s. –  yes, the Richard Boyle, who together with his family, is laid to rest in the Boyle Chapel in the South Transept of St. Mary’s Collegiate Church, Youghal.)
The first series of the six concerts was so successful that a second was quickly arranged, though neither of these series featured Messiah.
However, in March 1742 discussions took place regarding the possibility of a charity concert in Dublin for the April, at which Handel would present his Messiah. Choirs from St. Patrick’s and Christ Church Cathedrals were to participate and the concert would take place in New Music Hall in Fishamble Street at noon on April 13th 1742.  Initially Dean Jonathan Swift, Dean of St Patrick’s objected to the use of his choristers in a non-religious setting, however he later relented when it was outlined that the performance was for charitable purposes.

A public rehearsal was arranged in the Music Hall on the 8th April and this created enormous public interest and a massive clamour for tickets.  To ensure that the largest audience capacity could be achieved, gentlemen were requested to remove their swords and the ladies were asked to dispense with the wearing of hoops in their dresses on the night.  The discarding of these fashion accessories created an extra 100 places.  Seven hundred people attended the premiere on April 13.  Health & Safety requirements were quite different back then!   Traffic management was also put in place with the first ever one-way street system for carriages and sedan chairs temporarily installed in Fishamble Street.

The receipts on the night amounted to £400, (€100,000.00 to-days equivalent). proceeds of which went to Prisoners’ Debt Relief, Mercer’s Hospital and the Charitable Infirmary. The performance was mightily well received by audience and press alike and it became the current topic of conversation in the higher echelons of Dublin society for quite a while. 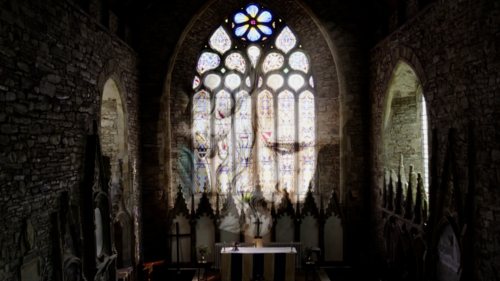 The last performance of the Messiah in 1742 took place on June 3rd and this time some panes of glass from the tops of each window were removed in order to keep the space/hall as cool as possible.  We don’t believe that there will be a requirement for that particular comfort at this April 24th 2022 (7.30pm)  performance of “Handel’s Messiah in Youghal”