Stories and pictures of great celebrations….

Tonight sees the launch by Youghal Celebrates History of their commemorative booklet on how Youghal celebrated 1916 – including all four “Degrees of Separation” talks, all the Comhaltas events, lots of photographs – a great souvenir of some terrific celebrations.

Youghal Celebrates 1916 – this little booklet has a number of articles linking Youghal to 1916 and the way the centenary was celebrated…. the stories include the ill-fated Isabella, the portrait of Roger Casement in the Tower of London, the story of Youghal when a young James Connolly was posted as a British soldier here, the story of Eric Hodges who died in the battle of the Somme, the story of Sean MacDiarmada….. a pictorial essay by Michael Hussey, photographs by Denise Fitzgerald, and of course, a huge note of appreciation to the Youghal News who covered a lot of the events Comhaltas organised. Edited by Kieran Groeger.

Booklets will be available for purchase on the night at €10.00 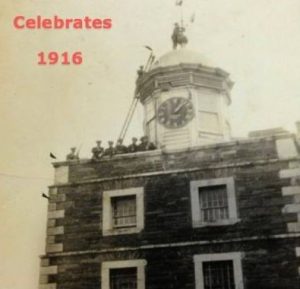