“When Irish Eyes are Smiling” 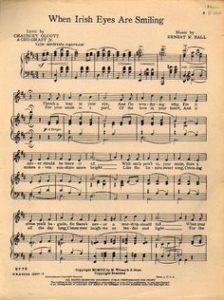 When Irish Eyes are Smiling” is a vivacious miscellany of Irish songs ranging from the bawdy “Finnegan’s Wake” to the heart rending “Macushla” by way of “Raglan Road”, “Ballyjamesduff” and “Slievenamon” and a host of others.   Narration is by our own Tommy Collins. The trio of classically trained singers are accompanied by the highly accomplished Bethan Lee.   The show is written and directed by the vastly experienced Cathal MacCabe.

When Irish Eyes are Smiling will do exactly as the title states – and who can resist a smile.

Sarah O’Mahony is a thrilling young soprano who graduated from the CIT, Cork School of Music. She is a primary school teacher and among other things she teaches piano and is the soloist with the highly respected Killeagh Choir.

Frank Ryan hails from County Waterford. For many years he was deeply involved in amateur drama and was a founding member of the highly successful Brideview Drama Group. He comes from a musical background and a chance meeting with Cathal MacCabe some years ago resulted in collaboration with the highly successful touring of “The Golden Years” “John McCormack” & “Mario Lanza”

Noel Somers originally from Dublin, where he had his original classical voice training and won numerous Feis medals, finally settled in Cork.  He has a broad repertoire of tenor songs. Noel sings in the Dominican Choir in Cork City and has appeared in a variety of concerts and shows.

Bethan Lee graduated with a Master of Arts in Piano from CIT, Cork School of Music. As well as teaching music theory and piano she is both an accomplished pianist and voice accompanist. She has performed all over the country with a wide variety of performers in a variety of shows including many in which some or all of the singers tonight were involved.

Refreshments will be available on the day!