Unveiling of “The Nellie Fleming – Last Moments” by Jack Lombard

A depiction of the tragic last moments “The Nellie Fleming”

American artist, Jack Lombard had just read historian, Michael Hackett’s book “Lost without Trace” –  so moved was Jack by the tragic story of Youghal schooner, “The Nellie Fleming” that he just had to put his feelings on canvas.

Jack has painted his depiction of “Nellies” last moments and is travelling from Philadelphia with his painting . The painting will have its unveiling on Sunday 2nd October at Lombards Bar @ 7.30pm

“The wind that night was fearful as it built up to record an average of seventy-five miles per hour for the whole of the next three days.  It became the worst storm in living memory on the Irish Sea.  More days passed but still no sign.  The awful realisation began to show in the population of a closely-knit fishing and sailing community.  Five local men with numerous family connections were gone!  No trace was ever found!  The ‘Nellie Fleming’, without an engine, was no match for that terrible storm.  Five lives taken together shocked the town so much that, even now, our elders can still feel the indescribable sadness.” 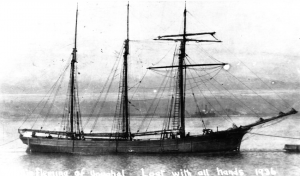