Cork Based cellist, Eimear Reidy enjoys a busy performing career throughout Europe both as a chamber musician and soloist. In the last decade Eimear has focused on Historical performance practice and has performed with some of the most accomplished performers in the field in some of Europe’s finest concert halls, including The Concertgebouw, Amsterdam, The Filharmonia,Krakow and Symphony Hall, Birmingham. Eimear enjoys a diversity of musical practices and collaborations, such as improvisation, experimental electronic music, sound art and composition. Eimear is a founding member of the Irish early music ensemble The Hibernian Muse whose album, Irish Airs and The Music of Carolan was recorded and released for RTE Lyric FM in 2014.

The programme includes a beautiful ricercar for solo cello by 17th century cellist and composer, Domenico Gabrielli, these pieces represent the earliest known compositions for solo cello and are very rarely performed in Ireland.
Bach’s cello suite No.1 is probably the most well known piece for solo cello and certainly never lost its popularity. The second cello suite in D minor is both intimate and philosophical in it’s nature and can be likened to one of the famous soliloquys of a Shakespeare tragedy.
The farewell to music composed at the end of O’Carolan’s life is one of his most beautiful pieces and a very fine example of eighteenth century Irish music. The recital will be performed on Baroque cello allowing the audience to hear the music as it would have been performed at the time it was composed. 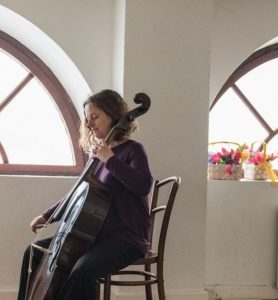