REPRO FREE 12/08/2020;
A statue of Captain Ahab in Youghal which was unveiled in Youghal.
The statue commemorates YoughalÕs transformation into the Massachusetts village of New Bedford for the opening scenes of John HustonÕs 1954 classic film adaptation of ÔMoby DickÕ. The Û35,000 sculpture, designed and developed by Cloyne based artist Matthew Thompson, was funded by Cork County Council, the Department of Rural and Community DevelopmentÕs Town and Village Renewal Scheme and by the fundraising efforts of local community group ÒYoughal 4 AllÓ.
The sculpture depicts the famous whaleÕs arch nemesis Captain Ahab at the helm of his ship, the ÒPequodÓ.Picture: John Hennessy 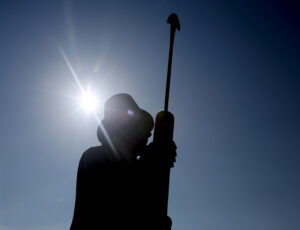