‘Let’s Talk Business’ Public Seminar Proves Hugely Successful for Small Business in East Cork Area
A major business event took place in Youghal, Co. Cork on Friday 10th March, 2017. The event was organised as part of Enterprise Week.
Hosted by Cork County Council in the Mall Arts Centre Youghal, and organised by The Youghal Socio-Economic Development Group, the event was developed with the aim of being a ‘one-stop shop’ for any start up or existing business to source funding and financial supports.
Featuring presentations from senior key professionals from Government Agencies, including Enterprise Ireland, Fáilte Ireland, and Local Enterprise Office, South & East Cork Area Development and Cork County Council, the event was extremely well received.
The key note speaker at the event was John Finn, MD of Treasury Solutions who captured the audience as he gave an overview of what small businesses should expect with regard to BREXIT.
Other highlights of the day included a number of case studies from small local entrepreneurs, Munster Brewery, and Annie’s Roasts who both gave their insights into the various pitfalls to expect at the start up stage, but also the huge amount of supports, both financial and non-financial they availed of on their journey.
The financial aspects of the start-up process were extremely well covered by presentations from Micro Finance Ireland, Strategic Banking Corporation, AIB Youghal and Youghal Credit Union.
The event was sponsored by Local Enterprise Office South Cork, Youghal Credit Union, AIB Youghal and Cork County Council. 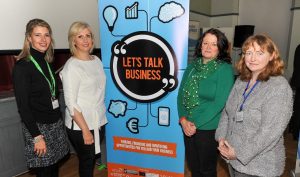