By Youghal Tourism Thursday AT 2:55PM

Firstly we salute Sarah Roche.   Sarah was incarcerated in Youghal Clock Gate Tower in 1826 for non-payment of a debt.   She had borrowed money from her brother and was unable to meet her repayment commitment.      Her brother had her thrown into gaol.    As a guest of the  gaoler in Youghal Clock Gate Tower, Sarah was cold – there was no glazing on the windows and the gaol afforded her just one blanket.  Sarah was hungry – she depended on the generosity of passersby to drop some food into a basket which was lowered by rope from the un-glazed windows.  Sometimes she got food – sometimes she didn’t.   Sarah also had to share her cell – no single rooms here and no segregation of the sexes  – Sarah had to share the cell sometimes with up to four or five others – male and female.   All toilet facilities were also shared, oh and by the way the facilities consisted of one bucket.  I won’t go on but you can imagine the tremendous odours. 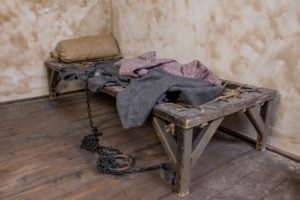 However, Sarah must have been made of sterner stuff because she struck a deal with her brother.  Her brother asked her to marry his friend, a John Meade.  If Sarah married John Mead her brother would wipe clear the debt and she would be released from the squalor of Youghal Clock Gate Tower with immediate effect.   It was Hobson’s choice really.  Sarah left Youghal Clock Gate Tower and married John.    Sarah and John had a very happy life together in a home with proper windows and nice fires in winter.   Happiness had come to Sarah, though in a most unusual manner.  We salute you Sarah. 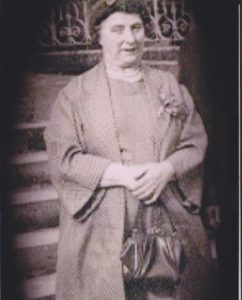 Agnes McGrath was married to Christy McGrath and Christy was employed as the Clock Caretaker.   His job was to maintain and wind the Clock of Youghal Clock Gate Tower twice a week and of course to ring the bell in the event of an emergency.    Accommodation came with the job and Christy & Agnes, together with their 4 children all lived in Youghal Clock Gate Tower – it was their family home.   Living conditions in the Tower were poor and times were tough but Agnes saw to it that the family were very well cared for, happy, content, warm and very well fed.    As well as Clock Caretaker, Christy was also a fisherman and he often took his son, John, on fishing expeditions where they caught lots of mackerel.  Agnes would cook a very healthy fish stew on her unique and inventive slow cooker.  This was a sawdust cooker – a very simple but effective way of slow cooking.  It was made up of a square biscuit tin filled with saw-dust and the cut-down handle of a brush.  Agnes used lighted paraffin in a small shoe polish tin to heat this oven.   According to her son John, Agnes’s fish stews were absolutely delicious.
Christy kept pigeons on the 4th floor of the tower and it was on this 4th floor too that  Agnes used to dry her clothes – No trouble driers or electricity – Agnes just opened the windows on each side of the tower and let the strong cross breeze do its duty.   Agnes also had to keep a very keen eye on her son John when he would bring friends up to see the pigeons – John often stole up to the roof with the buddies and walked along the wall parapet.  It was so dangerous – they could have fallen over the edge on onto the street – from the tallest building in the town.

Agnes had her work cut out for her keeping her eye on John!    Under the stewardship of a very strong willed and capable Agnes the McGraths lived very happily at Youghal Clock Gate Tower up until 1959 when the family moved  to another house in the town, with proper means of heating, a bath and bedrooms without prison bars!.   Agnes missed the Clock Gate Tower – yes,  it was cold and it was damp and while she loved and was very house proud of her new family home, she missed the Clock Gate and it always held a special place in her heart.

To find out more about Sarah and Agnes and indeed more about Youghal clock Gate Tower simply long on the www.youghalclockgate.ie.   Better still book a tour,   all I’ll say is…..its an experience not to be missed.